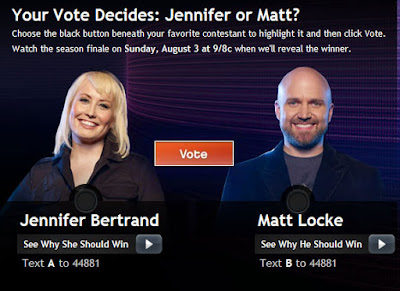 To those who know me personally, I have an uncanny ability to select the winner for reality TV contests like American Idol and Design Star. As a matter of fact, some of my girlfriends have asked me to stop telling them my predictions, because I “ruin” the finale for them.

Have you been watching HGTV’s Design Star this season? I have. My prediction all along has been Trisha and Matt in the finals. I was sure Trisha from Michigan would win the coveted Design Star Title and her own HGTV show. She is beautiful, articulate and an outstanding designer. Then last week she was eliminated. I must admit, the room deserved an elimination compared to the other two finalist. The challenge was redesigning a relative’s space. In Trisha’s case, it was her parent’s great room. When the stakes were high, she didn’t deliver her best work. (She replaced the existing furniture with updated pieces without addressing a new layout. It was tragic considering the layout wasn’t very good to begin with. )

Last night were the finals between the last two contenders. America has been asked to vote through Wednesday. It is now between Jennifer and Matt. The pressure! I can’t make my mind up.

I really like him, but as the weeks have gone by I have noted Matt’s weaknesses. When paired with a designer who can pattern blend, select color palettes and accessorize, Matt’s designs have been incredible. He is a great carpenter, with wonderful TV personality, but…. I don’t think he is a designer in the decorating sense. Most of the time he just avoids accessorizing all together to avoid any mistakes. He may like minimalistic, but come-on! Throw me a bone, or at least a lighted pillar or a coffee table book.

Jennifer is a great designer. She understands styles, she is great at accessories and like Matt, she has a good TV personality. The only problem is that for me she is lacking the “IT” factor. As much as I like her, she doesn’t have the a special quality that sticks out for me. Shouldn’t someone on television have something special you always remember them by?

Did the HGTV judges eliminate my beloved Trisha and make a grave mistake? It is possible. It’s Tuesday evening. I still haven’t voted. I called my sister this evening and she is having the exact same dilemma. It must run in the family.

Who did you vote for and why?