Designing for the Obama Family 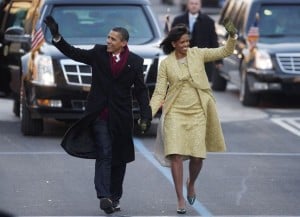 In my profession, the odds aren’t much better that you will be chosen to redesign the private quarters of the White House for the new first family. After several interviews, the Obama’s selected Michael Smith to redesign the most famous home in the United States.

You too can design the ideal Oval Office with IKEA’s Embrace Change tool.

I don’t know Michael Smith personally or professionally, but I can’t help but wonder what his reaction was to the news. Not his calm, cool and collected response to the media and design community at large – but his other reaction.

Was he so shocked it took a while to sink in? Did his stomach turn somersaults waiting for a decision? Did he raise his hands with a loud “yes” when he first heard the news? Did he call his Mom and best friends and giggle with glee?

On the other hand, Michael Smith has worked with several high-profile celebrity homes including the homes of Steven Spielberg, Dustin Hoffman, Michelle Pfeiffer, and Cindy Crawford. Was he confident all along he would be chosen? Was it just business as usual when he received the news?

Me? After I pinched myself, I’d probably first call my Dad with the news. I think my conservative right-winged midwestern father would have mixed feelings. On one hand, I was designing the private quarter of the White House. On the other hand, it was for a Democrat. [gasp]

Dad and I don’t always see eye to eye when it comes to politics. I couldn’t imagine designing for a more progressive, wonderful first family than the Obamas. Plus, maybe I would get the chance to toss a ball on the south lawn for the first puppy.

But, that is just me. What would your reaction be if you were chosen to design the interior of the White House for the first family?